You may be wondering why, a Town Council supporter such as myself, has chosen to use the phrase ‘Be careful what you wish for' as part of the title for my latest blog. This phrase has been quoted more than once by the anti-town council, Conservative  ex leader of the RDC and more recently in the anonymously authored centre page spread of ‘The Bexhill Voice’ booklet.
The reason for my choice of phrase is simple…it is good advice. When it comes to changing the way our lovely town is governed, we need to reflect very carefully on whether Bexhill would really benefit. 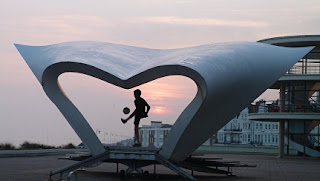 Let’s have a quick look at the history…..
In 1902 King Edward VII awarded Bexhill a royal charter to become Bexhill Borough Council, but, for some reason, the council was lost in 1974. Bexhill, Battle and Rye were merged along with the 29 parish councils to become the mostly rural Rother District Council. Rye kept its own town council, Battle kept its own council, but Bexhill was simply subsumed into Rother and lost its individual voice. The result was that the majority of councillors elected to Rother (whatever their politics) did not represent Bexhill wards. 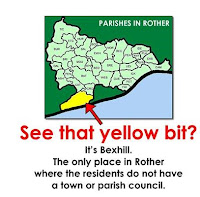 In 2017, following a massive campaign by a group called Democracy 4 Bexhill, a petition forced the then Rother Council to hold a consultation about creating a town council for Bexhill. Bearing in mind that most local consultations attract at most a few hundred replies, the response was massive. Over 9000 residents participated, and 93% of respondents expressed their desire for a Town Council for Bexhill. In a stunning act of ignoring residents’ views, the then ruling Conservative group on Rother Council ignored the people and rejected the result. Unsurprisingly, the residents of Bexhill felt disenfranchised. This decision lost the Conservatives their council majority in the next local election.
So we now have a different council with sufficient Councillors who listen to the residents and can initiate a change of governance for Bexhill. We are being given a second chance... a second consultation, a final opportunity to give us democratic parity with Battle and Rye. Bexhill could soon have a greater say in its own future.
But beware, the anti-town council group are still active and protesting loudly. They will try to scaremonger residents into rejecting change. Do not allow yourselves to be frightened into saying 'no'. Be careful what you wish for. If we don’t achieve a town council this time, another consultation is unlikely to happen again soon. In four years’ time we could find ourselves back in the bad old days when the council ruled, but didn’t listen. If we select 'no' to a Town Council for Bexhill, then we will continue to find ourselves in the hands of some Councillors who do not fully understand our town’s needs, because they were elected to represent one or more of the many out lying villages in Rother….delightful, but not Bexhill. 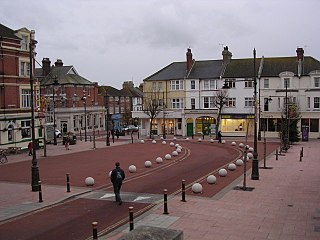 I find it difficult to understand the reasoning of those in the current local Tory group, who seem to be so against a town council for Bexhill, especially as the national Tory party is in favour of localism. I can’t help but wonder why someone elected to Brede or, say Sedlescombe, would want involvement in every last decision about the development of Bexhill. It seems to be connected to power and budgets, but it still feels slightly mysterious.
So let’s look at one of the worries which continue to be inflated by the no campaign, which is of course the cost.
We don’t know yet for what a Town Council would ultimately be responsible, but we do know that if they get ‘above’ themselves and put up our tax to an unaffordable rate or do not visibly and significantly enhance our town and deliver much needed extra services, we will vote them out. They will soon be replaced. And our initial votes are likely to be cast in favour of candidates who state that keeping costs down are a priority. These councillors will be local people who we will meet in town regularly. There will be no hiding away. We really can hold them to account.
The illustrative initial costs in the RDC leaflet are given as aprox £22-00 per year for a band D property. According to my research, this will reduce to £17-11 for band B and £14-67 for a band A, If you are entitled to further reductions then this will drop further, so a band A council tax payer could be paying as little extra as £2.93 per annum. Some Councillors are saying with careful budgeting, it could be even lower. And with the prospect of potential initiatives such as more trees and planted areas in our streets, better seating, toilets and communal family areas, community fridges, greater access to grants and investment and increased tourism bringing more employment and prosperity to the whole of Bexhill, the advantages are obvious. By demonstrating a listening approach, Bexhill-centred enthusiasm and a good dollop of creativity and vision, a Town Council could transform all areas of our town.

The latest consultation is a ‘last chance’ lifeline for Bexhill. Please don’t ignore this vital and historic opportunity. Be careful what you wish for. I urge you to say yes to a Town Council for Bexhill.

This blog post is the personal view of Bexhill resident, Claire Baldry. It is not linked to any political party or campaign group.