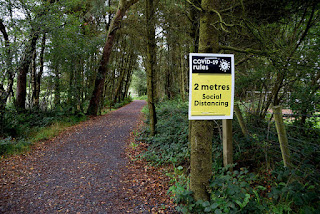 A few weeks ago, I found myself engaging in a slightly uncomfortable conversation with a highly individualised and free-spirited younger friend of mine, for whom I have enormous respect. He expressed the view that it was not the role of government to dictate to people how they should keep themselves safe. This, he said, was a matter of individual choice. Now in his forties, he did not remember the similar arguments which ensued in the 60s and 70s before the wearing of seatbelts and crash helmets was made compulsory, two safety measures which we now largely accept. He did however inspire me to ask questions of myself. As someone now aged in my mid-sixties, and married to someone slightly older with Type 1 Diabetes, did I have the right to expect younger people who are generally less vulnerable than I am to curtail their freedoms and put their careers in jeopardy to lessen my risk of catching COVID 19?

On reflection, I don’t think I do have that right as an individual, but as part of a community, I believe we have a responsibility to try to protect both the young and the vulnerable of all ages. It is the mark of a civilised society. The moral dilemma arises out of conflicting priorities. As we have seen, if too much protection against COVID 19 is imposed, it does impact negatively on the economy and on our general well-being including our mental health. On the other hand, if we were to simply let this virus run riot, our hospitals would be over-run, and the health of the nation would suffer well beyond the COVID crisis.

For the first time in many of our lives, we are faced with a massive real-life predicament, and the consequences of our choices could be life threatening. I don’t necessarily agree with all the actions taken so far by our government, but I doubt I could have done any better. We are fighting an unknown enemy.

Many people have expressed the view that we should rely on the ‘common sense’ of the population. In an ideal world this would make immense sense, but we can all cite examples of late-night partying, intergenerational hugging or simply lack of distance which bring the offenders’ common sense into question. I for one was very relieved when much of the guidance finally became statutory. Instead of appearing over-cautious, I could now truthfully state that I was not prepared to break the law. I’m inclined to think that all the guidance should be statutory. We are in the midst of a major health crisis, and I am more than happy to be told, in no uncertain terms, what I can and can’t do.

I am enormously grateful to those younger people whose jobs have sadly been put at risk, in order to protect the health service and the more vulnerable. I have never expected or demanded that they make sacrifices for me. I am however proud to live in a society which tries to look after each and every member of our community.