Books For Older Readers: Newsletter One

How it began……
During an online chat about six months ago 62 year-old debut novelist, Claire Baldry, asked a group of likeminded facebook users a question which generated hundreds of responses. She enquired “Why aren't traditional publishing houses more interested in novels with older characters at the centre of the plot?” Answers to her question immediately exploded over Facebook. She had inadvertently unplugged a torrent of opinions. One blogger spoke for many when she said “I've been banging on about this for ages, but no one seems to listen".
So Claire set up a facebook group and created a website, which she called ‘Books for Older Readers’. She later confessed  ”I would love to tell you that my actions were the result of a longstanding literary vision, but that would not be truthful. I was motivated by a combination of curiosity, the desire to help out and a self-interested wish to increase the sales of my own recently published book”.
Initial reactions to the website were mixed. Enthusiasm and gratitude were interspersed with (sometimes angry) accusations on social media that Claire was being ageist and trying to pigeon hole reading tastes. But Claire kept going. As she explained “I never really understood the ageist argument, because books are already described as ‘young adult’ or ‘chicklit’. My website was certainly not intended to tell people of any age what they should be reading. It was simply a tool for readers who were seeking books which reflected some of those issues and emotions experienced by people in mid-life and beyond.”
Despite the occasional criticism, the facebook group proved extremely popular. Moreover, the website hits quickly grew from hundreds to thousands.  People began to blog about the initiative, and very many authors asked for their books to be featured on the site. Readers were interested in browsing the digital bookshelves to discover new titles which might appeal to them. Claire found herself at the start of what could now be described as a literary campaign.

The Website
The Books for Older Readers website now features 45 very varied titles with more on the way. If you haven’t had time to look recently, this is the link www.booksforolderreaders.co.uk 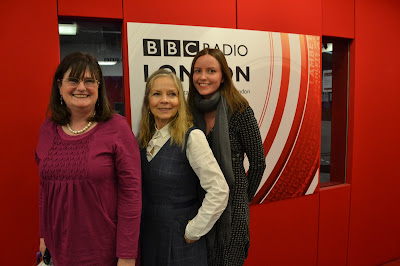 By coincidence, at about the same time as Claire set up the website, a forward looking (and young) commissioning editor of a large publishing house put out a timely request for manuscripts which contained older protagonists. Phoebe Morgan had noticed a demand. One of the Older Readers facebook group with media experience alerted Claire, and in January this year Christine Webber and Claire Baldry, both now novelists, were invited to be interviewed with Phoebe on the BBC Radio London Jo Good Show. Christine was interviewed live over the phone, whilst Claire travelled to New Broadcasting House to meet up with Jo and Phoebe for a face to face discussion. The session proved popular with listeners and gave extra credibility to the idea that some themes in books are more likely to appeal to older readers, not to mention the commercial argument that readers of a certain age are often avid buyers of books.

Where Next?
There is no master plan for the future direction of the group. Claire’s view is that now the website seems to be taking off, she will just wait and see where it leads.
There will definitely be further (probably shorter) newsletters. More giveaways have been discussed, and hopefully the group will attract future and increasing press coverage. Look out for stalls and speakers at occasional Literary Festivals.
With continuing success, both ‘older’ readers, and writers whose books appeal to those readers, could become the winners.

Giveaway
With winners in mind, and to celebrate their very first newsletter, the Books For Older Readers group are offering a 3 Book Bundle to one lucky newsletter subscriber. For a chance to win, subscribers must have a UK address and sign up by 31st March 2018. This is the link.  http://www.booksforolderreaders.co.uk/subscribe-to-newsletter/4594153382 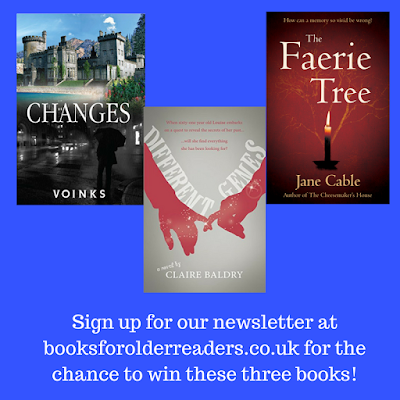 Thank you to the following authors for contributing to the giveaway

‘Changes’ by Voinks   "Changes happen in life. Just hold on tight and enjoy the ride."

Dates for your Diary

For more details go to http://www.booksforolderreaders.co.uk/events-calendar/4594226653

We are delighted that you have taken an interest in our group.
Thank you for your support.